Who is Software developer Dominic Streiff? 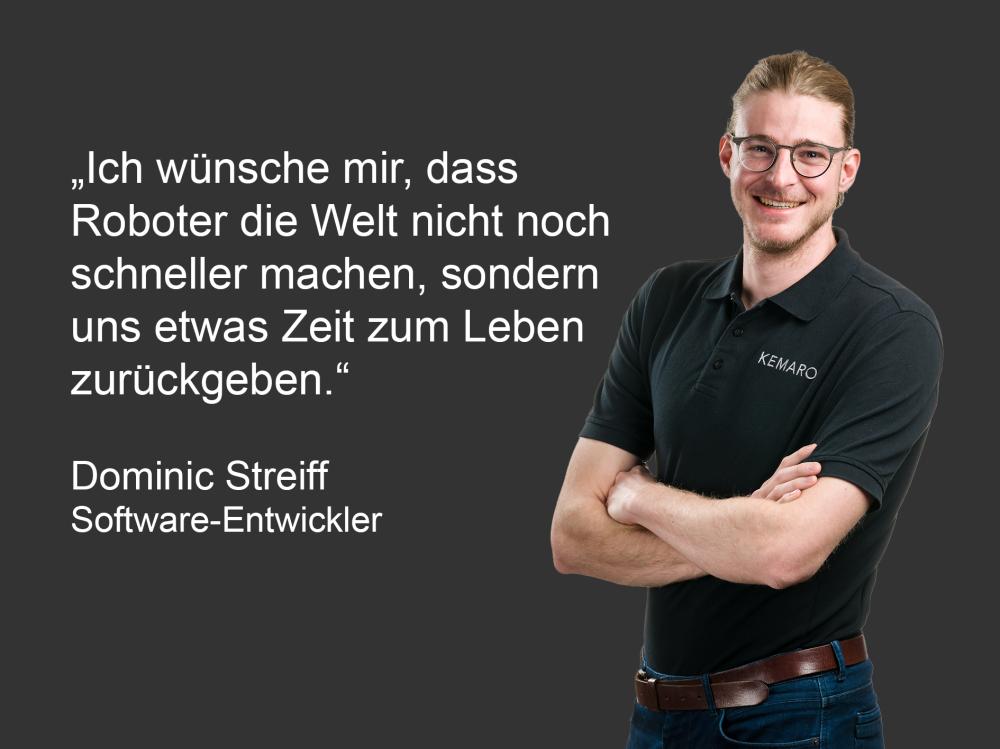 “I wish that robots would not make the world even faster, but give us back some time to live.”

After studying electrical engineering at ETH, Dominic Streiff wanted to work in applied robotics. During his final project in the bachelor’s program, he focused on the locomotor system of a humanoid robot. While completing his master’s, his fascination with a robots’ perceptual abilities and its“sense of direction” crystallized. It was important to him to work on up-and-comingprojects with design potential. He soon had enough of academicprojects and began specifically looked for a company with a marketable robotic product, and thus found KEMARO AG. With the K900, he found a product that was ready for the market, but not yet fully developed. Today, he particularly appreciates the direct feedback from customers about his work as a software engineer, and that he is able to quickly act on this. He feels well integrated in the small team and is surrounded by knowledgeable colleagues.

“There are still many labor intensive jobs that are time-consuming, expensive and boring,” mentions Dominic Streiff. Not only does he need to have fun at work, but there has to be a reason for doing it, a vision. “We need to changethe system to improve life for people”. For him, the worst thing is to fill time with boring, exhausting work. He sees the introduction ofjob automation, using robots and artificial intelligence (AI), as something that needs to happen in numerous industries, for example, to standardize the 4-day week or significantly reduce stress for workers. “Humans should devote themselves to more creative activities again, where they are superior to robots,” he said. “I wish that robots would not make the world even faster, but give us back some time to live.”

He has bigger things in mind for KEMARO AG. Cleaning, he believes, is just the beginning. A broad portfolio with robots for a wide variety of applications is to be developed and marketed. In his opinion, it would be ideal if all robots were available on a common platform. This would make it possible to adapt robots on a modular basis and fulfill customer-specific wishes.

Of course, he also sees problems, for example the wear and tear on rare resources needed to produce robots and computer systems. The high computing power of powerful AIs also requires an enormous amount of energy. In his opinion, this must be factored in when weighing up the benefits. When asked about the loss of jobs, Dominic Streiff answered without hesitation: “We are not taking away jobs, we are creating new ones. The more robots there are in the world, the more manufacturing and maintenance jobs there will be.” Additionally, more time would be available for value-added work. It’s understandable that not everyone has the training and intellect for complex tasks, he said, but almost everything can be simplified. “Ultimately, you can do any complex task in ten less complex tasks.” This makes sense and offers a new, promising perspective.