“Creating both real and digital life experiences is my goal.” 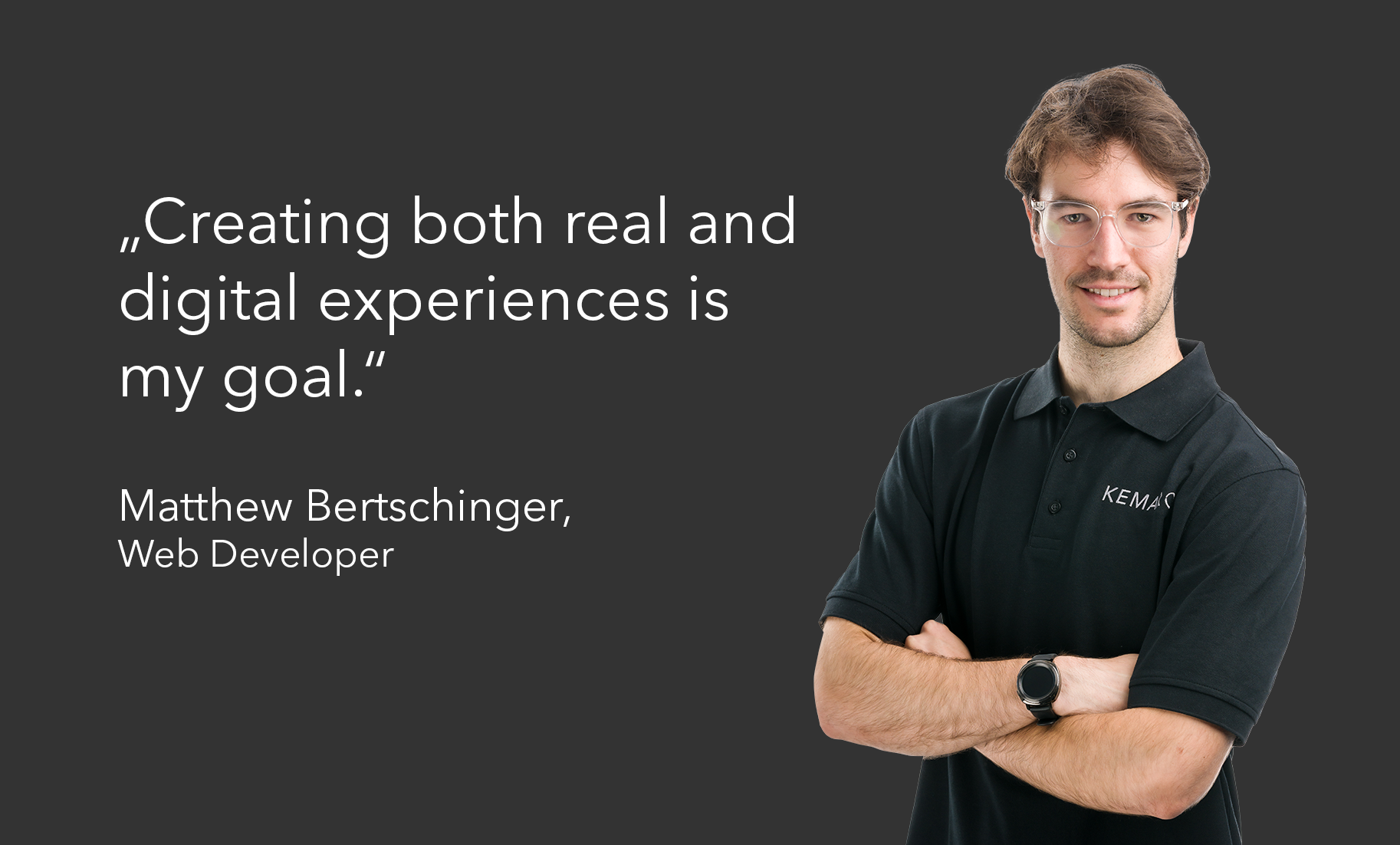 Having travelled halfway around the world, Matthew Bertschinger arrived in Eschlikon at KEMARO AG a few months ago. The 23-year-old has decided to start a new chapter in Switzerland after 18 years in New Zealand. As a child, he immigrated with his family to his mother’s home country, occasionally returning to Switzerland during the holidays, and is now back and living here.

Matthew has been interested in technology and robotics from a young age and went on to study mechatronic Engineering in Christchurch. This is an engineering discipline that deals with mechanical and electronic systems and how they interact. During one of his summer holidays, he travelled to Switzerland and did an internship at a smart sensor development company near Lake Zurich. In his spare time, he taught himself web development, using video tutorials and online courses. This is how the self-proclaimed nerd became a versatile all-rounder in software and hardware. With this knowledge, he founded his first start-up at the age of 22, an organisation and networking platform for administration in sports clubs.

Matthew does not embody the classic image of a nerd who only sits in front of a computer. In his free time, he tries to travel and play sport as often as possible. In addition to hiking, skiing and football, he plays floorball at the highest level in New Zealand. His father was one of the pioneers who brought floorball from Switzerland to New Zealand and promoted its popularity in the island nation.

One factor in Matthew’s move to Switzerland was the opportunity to advance in floorball, which was becoming difficult in New Zealand. He currently trains twice a week with Unihockey Luzern. For him, the almost two-hour drive to Central Switzerland is “no big deal”, as he is used to travelling much longer distances in New Zealand. He benefits from the flexible working hours at KEMARO AG and enjoys working on the train on his way to training.

At KEMARO AG, Matthew works as a web developer, utlilising the skills he learnt through his degree in mechatronics and experience in the startup environment. He enjoys developing web-based technologies to connect people and make jobs easier and faster. He especially appreciates being able to see the results of his work directly and test them on the robot. He also enjoys learning from his friendly, competent colleagues.

He sees many advantages for people in automation and the further development of robots. Whether in the world of industry, healthcare or agriculture – there are still physical tasks in many areas that can be performed by machines, giving people more time and reducing their risk of physical injury. He sees future jobs primarily in the creative and social sectors. For his own future, Matthew wants an independent life as a digital nomad. “Simultaneously creating real and digital life experiences is my goal.”